The injera of life

A grad school classmate of mine told me in 1986 that in her North Dakota town’s newspaper, she had seen an item in the grocery ad that said, “Tortillas (Mexican lefse).” I doubt that there’s a community in the U.S. today that would need an explanation for tortillas, which goes to show how times change. On the other hand, I think there are probably a lot of people who are unaware of lefse (LEFF-suh), the potato pancake that comprises half of the Norwegian dynamic duo of lutefisk and lefse. Its pal lutefisk (LOO-tə-fisk) is made from dried cod soaked for several days in lye water to rehydrate it. An acquired taste, shall we say. There were a lot of Norwegians where I grew up—it seems like half of the kids in my class ended in “-sen.”¹ However, I’ve never had the opportunity to taste the beloved/dreaded² lutefisk.

Many countries have some sort of flat cake or bread that plays an important role in their cuisine. Off the top of my head, in addition to lefse and tortillas, I can think of crêpes, Indian flatbread, spring roll wrappers, latkes, American pancakes, and those little mu shu pancakes. If you want to stretch it, you might include wonton wrappers and flat pasta that gets turned into lasagna noodles or ravioli.

But where I am going, they eat injera. Tomorrow, I get on a plane and fly with my sister to Ethiopia. Injera is a flatbread like no other. It is made of teff, a grain rarely heard of here unless you are in a place with a large Ethiopian community like Seattle. The spongy-textured injera is a large circle that serves as both plate and utensil—you tear off pieces and scoop up the food with them, rather than using a fork. I love the Ethiopian food that I’ve eaten here and am really looking forward to trying some of the real thing! 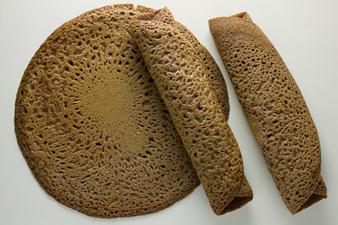 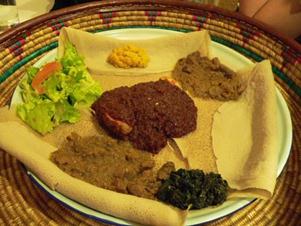 Amharic, the principal language of Ethiopia, is a Semitic language (in the same family as Hebrew and Arabic) that uses a syllabary rather than an alphabet. That is, different letters take different shapes depending on the consonant-vowel combination they are part of. 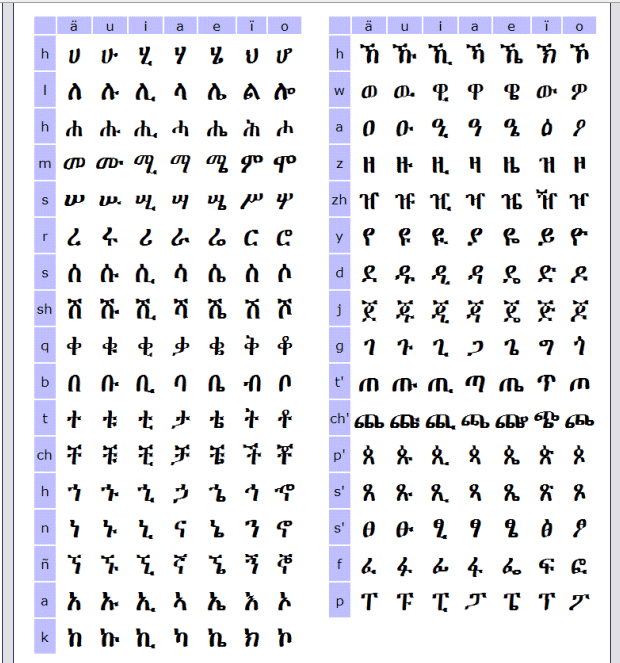 Can you imagine? It’s like having over 200 letters! My nephew, who lives there and whom we are visiting, has considerable language talent and skill of his own—he has a graduate degree and was a Spanish teacher before he moved to Ethiopia. He reports that it took him well over a year to gain even the most basic ability to write Amharic. No wonder!

There are many words of African origin in English, most but not all of which came in via involuntary African immigrants to the Caribbean and the American South. You’ll recognize these words—among them are voodoo, safari, bongo, and yam. However, I have not been able to identify any Amharic words that have been adopted into English. If Ethiopian cuisine spreads like Mexican food has over the last couple of decades, though, you may see an ad for injera in a grocery flyer near you some day.
_______
¹ Especially if you count the “-sons.” “-Son” is usually Swedish, while “-sen” is usually Norwegian or Danish.
² “It is said that about half the Norwegians who immigrated to America came in order to escape the hated lutefisk, and the other half came to spread the gospel of lutefisk’s wonderfulness.”
– Norwegian-American saying

3 Responses to The injera of life