To bid adieu to National Poetry Month, I share with you my favorite poem, “The Layers,” by Stanley Kunitz. I met this poem about 13 years ago. I was driving south on I-5 from Seattle and heard it being read on some NPR program. It hit me hard. I had missed the title and poet’s name, so I simultaneously was absorbing its wonderfulness and trying to memorize enough keywords to be able to find it later. I succeeded. Since then I have gone back to it many times, perhaps with a period of months or years in between. It never ceases to speak to me, and always in a different way. It and the Dawna Markova poem I posted earlier this month were the two readings at our wedding in 2004.

There is a poetry garden in Seattle Center, a tiny square of space between the cacophonic territories of KeyArena and the Armory (formerly known as Center House). Along the garden’s walks lie rocks with snippets of poetry etched into them. It’s a lovely place for a short stroll if you need an escape from the heat or the noise that Seattle Center can offer on busy days. 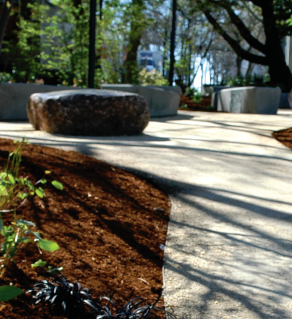 I love the whole poem, but the thing I find most inspiring is the ending. His prophecy, or his determination, or however he viewed the line, was borne out. He was 73 when the poem was first published. He lived to be 100, dying in 2006.

I have walked through many lives,
some of them my own,
and I am not who I was,
though some principle of being
abides, from which I struggle
not to stray.
When I look behind,
as I am compelled to look
before I can gather strength
to proceed on my journey,
I see the milestones dwindling
toward the horizon
and the slow fires trailing
from the abandoned camp-sites,
over which scavenger angels
wheel on heavy wings.
Oh, I have made myself a tribe
out of my true affections,
and my tribe is scattered!
How shall the heart be reconciled
to its feast of losses?
In a rising wind
the manic dust of my friends,
those who fell along the way,
bitterly stings my face.
Yet I turn, I turn,
exulting somewhat,
with my will intact to go
wherever I need to go,
and every stone on the road
precious to me.
In my darkest night,
when the moon was covered
and I roamed through wreckage,
a nimbus-clouded voice
directed me:
“Live in the layers,
not on the litter.
“Though I lack the art
to decipher it,
no doubt the next chapter
in my book of transformations
is already written.
I am not done with my changes. 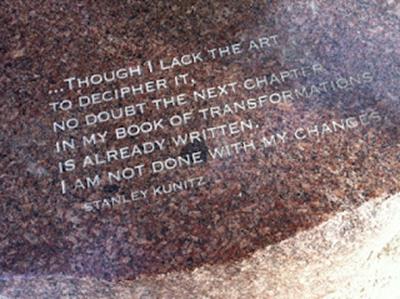