She says I should tweet. Others would enjoy what I have to say, she tells me. I set up an account, but having all that random stuff streaming towards me was overwhelming, so I quit looking. I am perhaps becoming a curmudgeon? Besides. She gets the benefit of all my odd and witty thoughts, and she’s the one I really want to entertain. Most mornings, we read the Seattle Times in print. I provide a running commentary, because I think out loud. Who knows what the Professor thinks most of the time; she’s an introvert. But without further ado, today’s paper. (Doesn’t it make you a little nervous that nothing is done with further ado? I feel like I’m missing some ado.)

Have you seen the Pumpkinstein? Awesome! The Whole Foods reference later in the linked NYT story is somehow disquieting, though. The hippie co-op movement of the ’70s—the one that aimed to bring power over their food to the people—offered visions of reasonably priced basic foods, like TVP in bulk bins, scooped out by women smelling of patchouli. Somehow, over time, the commercial descendants of this effort grew to offer the overpriced to the upper class, as well as the opportunity for those who can afford it to feel like their food is holier than Safeway. Different post. And I do like the salad bar. Oh right. Pumpkinstein. 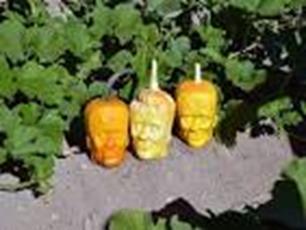 “Ask Amy” is so much better than when she first started. I think she’s growing in wisdom, perhaps from all the flack she got from her horrible answers early on. I was also pleased to discover that she’s very funny and clever as a panelist on Wait, Wait, Don’t Tell Me.

Marie Osmond turns 55 today. Over the years, do you think that she’s come down on one side or the other? Everyone grows and changes over time. I wonder if by now she has decided that she’s just a little bit more one than the other—country or rock ‘n’ roll.

Jimmy Carter’s grandson is running for governor of Georgia—or actually, as the typo in our print version would have it—”George governor”. President Carter recently spoke on his behalf at a black church in Albany, where he apparently said that that they should vote for Jason Carter to help his grandson “make Martin Luther King’s dream come true.” Um….OK. I have no context for the remark, but I’m thinking that MLK’s dream might have included, rather, a black governor of Georgia. Still, if you have to pick, you wanna go with the candidate in favor of expanding voting rights.

Some guys in Mogadishu blew up a café, killing 11 and wounding 8. It is suspected that this is the handiwork of a group who is avenging the death of their leader, killed in September in a U.S. airstrike. So…were there Americans at the café? Was that the point? I’m having a hard time seeing the connection. Regardless of that, is he avenged now? Is 11 good enough? I am pissed at my neighbor whose dog pooped on my lawn. I’m going to go bomb the pound.¹

They couldn’t be out : Ike Jones, an African American film producer from the ’60s, passed away at 84. He was married to a Swedish-born actress, and they had to keep the marriage secret. The interracial closet. The two issues have so much in common.

OMG, doesn’t Hewlett-Packard CEO Meg Whitman look in this picture like a blonde version of Frasier Crane’s evil agent Bebe Glazer?? (She was such an enormous presence. I can’t believe Bebe was in only 11 of the 263 episodes.) 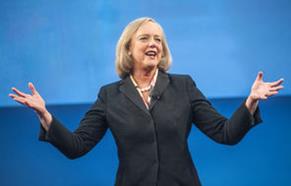 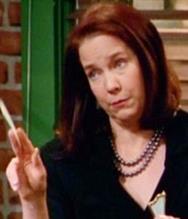 There were two pictures of female CEO’s on the business page today. The other was Yahoo exec Marissa Mayer. I think this means women have equality now. Kinda like a black president proves we have racial equality! Do you think Whitman and Mayer got where they are with good karma?

And that’s how it is at my house in the morning.

—
1 Disclaimer. This statement is to be interpreted only as sarcastically demonstrative. We don’t have a lawn. We have native landscaping. I also don’t have a bomb, and I don’t plan to use the one I don’t have for anything, either. Recently I was dropping The Professor off at the airport. I told her she was the bomb. Reply: “Don’t say bomb at the airport!” Fortunately, there were no TSA agents in earshot.