This was in today’s paper. Is the Times caught in a bygone era? At first I thought ’60s, but maybe I should guess ’50s, since the “by Bob” phrase looks like one of those Filmotype fonts from that era. (Google Filmotype to see what I mean.) 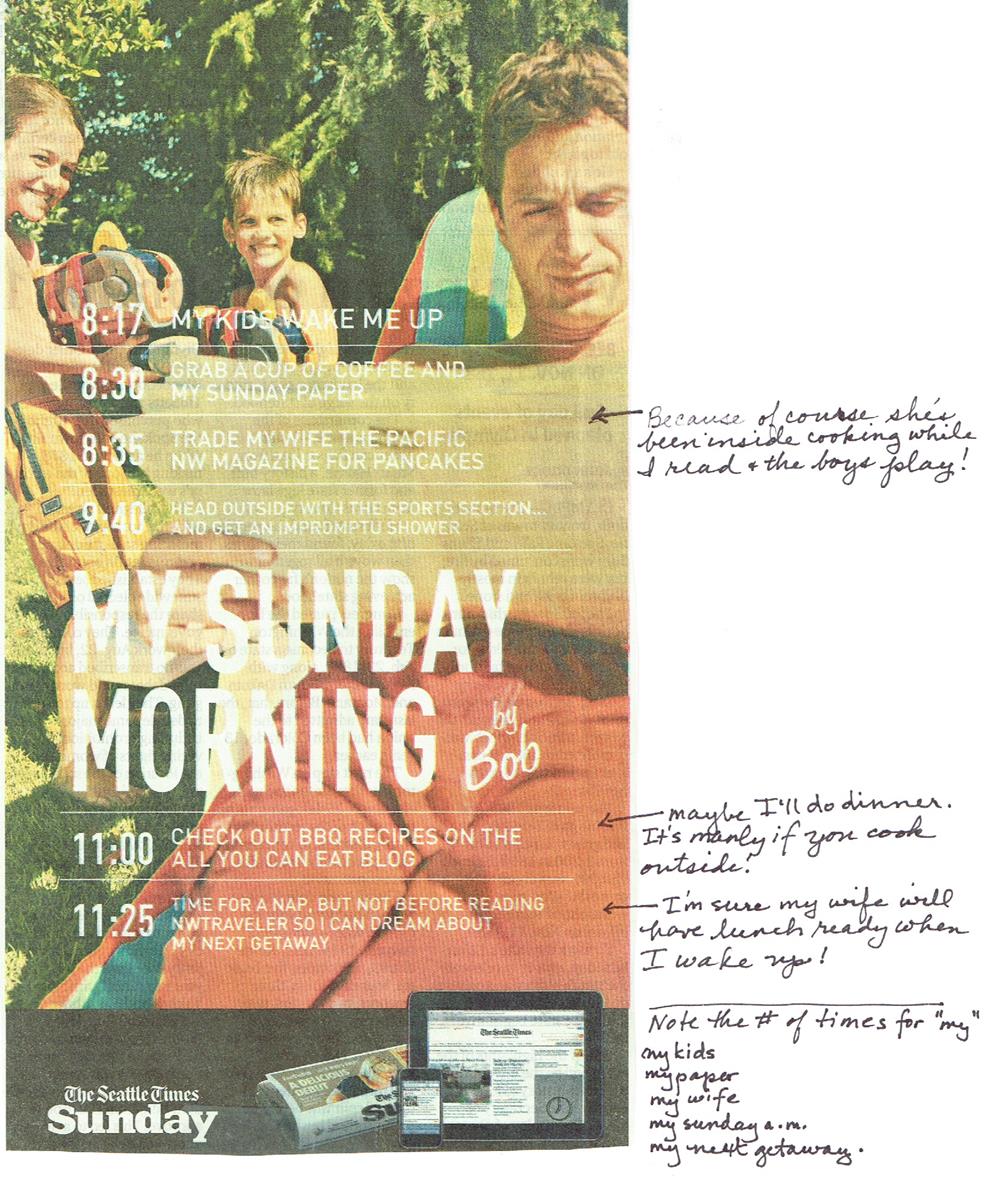 7:00 Get up and start laundry. While first loads of clothes are running, strip sheets off boys’ beds and gather dirty towels from bathrooms. Try to keep boys quiet so they won’t wake up their dad.
8:00 Take a shower. Find upon finishing that the boys have awakened their dad and that they are all hungry.
8:18 Quick strip our bed and take the sheets to the laundry room
8:20 Begin cooking breakfast.
8:35 Sit down for a couple minutes and have something to eat while reading Pacific NW Magazine. Enjoy the Then & Now feature.
8:40 Clean the kitchen.
8:50 Continue laundry and cleaning tasks.
10:45 Look for deals in Seattle Times grocery ads. Choose recipes for the upcoming week. Make shopping list. Flip through coupon file to see what’s there to use this week.
11:15 Go to grocery store.
12:00 Return from store, put away groceries.
12:15 Put last loads of clothes into washer and dryer.
12:20 Begin cooking lunch.
12:45 Feed the boys, since they don’t want to wait until their dad wakes up to eat.
1:00 Feed my well rested husband his lunch. Have a bite myself.
1:20 Clean the kitchen.
1:30 Work on Powerpoint for Monday’s presentation.
2:30 Spend two hours catching up on email.
4:30 Read briefing reports I must be familiar with by Tuesday’s new client meeting.
5:30 Tell hubby how great his BBQ efforts are and enjoy a meal that for once I didn’t have to cook.
6:00 Clean the kitchen.

My dad always cooked us breakfast.

Posted in Uncategorized | Comments Off on Mad Men working now for Seattle Times?

Remember Blockbuster? The blue and yellow ticket stub people that did their best to maximally shaft the customer out of late fees, but you couldn’t avoid it because it was your best option? Yes, that’s the one. They’re dead now. Defunct as of 11/7/13. (I started to say RIP, but that seems overly kind.)

So The Professor and I were in there looking for something to entertain us for an evening. I was listlessly perusing the usual selection of heteroromcoms and adventure or hero movies where the guy saves/gets the girl. All of a sudden I thought and said (those two activities are often nearly simultaneous for me, frequently to my embarrassment or detriment), “I am so sick of watching movies about straight people.” I suppose it’s how Jews feel at the seasonal onslaught of Christmas movies, or how people of color feel all year long. I felt like there was nothing on the shelf in front of me that reflected my experience.

Because The Professor has spent over 20 years tracking all things new and techy, she of course had an answer for me involving the internet. “Why don’t we try Netflix?” I can’t remember if I’d heard of it already, or whether she explained it to me then. But within days, our first red envelope had arrived. It didn’t turn into the AGATT (All Gay All The Time) film festival at our house, but at least we had some options. I still like to watch movies about gay characters sometimes, but mostly I like to watch good movies.

I had a similar thought process recently as I looked through a stack of books I had sitting on the bedside table waiting to be read. (Isn’t a stack of unread books delicious!?!) I don’t read much of anything that doesn’t closely approach four stars on goodreads.com, so I like good books the same as I like good movies. But I thought, “Where are the good gay books? I’m not limited to what they have on the shelf at the nearby library branch like I was at Blockbuster. King County Library System (the gem of all public library gems) can get me anything I want.” Off to the internet I went, in search of lists of best gay and lesbian novels. Cross referencing with goodreads ratings, I added a lot of new things to my “to read” list. That stack beside my bed still isn’t AGATT, but at least I have some options.

One of those highly rated books that I read recently is Call Me By Your Name, by André Aciman. It’s a summer love story about an older teen and a young scholar who meet in Italy in 1986, fall in love and, inevitably, end up going their separate ways after the scholar returns to America for fall term. Even if you are lucky enough to have a summer love, if you’re 17 and 24 when you meet, the chances are rather slim that you’ll end up together for good. This beautiful story captures well the excruciating joy of that first time your heart is pierced so and filled with desire and passion, and the unbearable anguish of losing that same first love. [Intrepid Reader, if you’ll notice this paragraph, no indication is given of the gender of the teen or the scholar. They are two men, but they wouldn’t have to be. The story is universal. Raise your hand if something like this happened to you, if you never got over it, if the person sometimes shadows your days even now these many years later, even now that you’ve moved on to and through many other loves.]

I’ll leave you with a passage in this book that struck me as capturing particularly well the way I felt the first time I really made serious love. This wasn’t the first time I’d kissed a girl; I’d known for a few years that I leaned in that direction. But this was the first time I felt my heart pierced with desire and passion…and so forth, see above. It was the moment my being rose up and said loudly, unmistakably—yes, this is where I belong. I was 18. She was 22. It was summer.

From this moment on, I thought, from this moment on—I had, as I’d never before in my life, the distinct feeling of arriving somewhere very dear, of wanting this forever, of being me, me, me, me and no one else, just me, of finding in each shiver that ran down my arms something totally alien and yet by no means unfamiliar, as if all this had been part of me all of my life and I’d misplaced it and [s]he had helped me find it. The dream had been right—this was like coming home, like asking, Where have I been all my life?

Posted in Uncategorized | Comments Off on Just ask Danny Zuko

In which I eschew candles and cake

Today is The Professor’s birthday.

As I post this, she is in the air, on one of the innumerable trips in which she indefatigably gives to her profession by contributing her brilliance and clear head (yes, as in “clearer heads prevail”—have you ever been in a professional association?) to various national efforts. She will probably read the post on the plane. [Sorry in advance for making you cry in front of your fellow passengers. It’s early morning. If we had to get up at 4, maybe they are from Puyallup and Poulsbo and will have gotten up at 2. Maybe they’ll be sleeping.]

You, Intrepid Reader, probably know that cumpleaños means “birthday” in Spanish. Did you know it means “he/she/you complete[s] years”? (You’re thinking, “That’s obvious, now that I look at it.”) Cumplir años is “to have a birthday,” and “to turn x number of years old” (let’s say 10) is cumplir 10 años. Be sure you put the tilde on the ñ, because anos means anuses.

We’ve shared so much in 15 years. Yards of laughter and Pacific Northwest fleece. (I recently learned that type of construction is called a zeugma.) Guffaws, giggles, snickers, and chuckles—and brief stony silences, which are our version of a fight. But whatever we share, from heading to the airport in the wee hours, to decorating an elaborate gingerbread house together, to huddling in a wintertime Oregon Coast yurt while listening to the raccoons scrabble beneath our floor, to riding down the Table Mountain funicular in Capetown, to enjoying our daily dogwalk through the neighborhood as we each debrief the other on the book we are currently reading, it is all

Bless the broken road that led me straight to you. –Rascal Flatts

This is Verla. I’m not available right now, so you can’t avail yourself of me. Which kinda sounds dirty, but isn’t. Please leave a message after the tone, which I say out of habit in spite of the fact that answering machines and voicemail have been widely used for over 25 years and thus I’m certain you know without being told what to do when you hear said tone. I’ll call you back as soon as I can, and by “can,” I mean as soon as is warranted depending on who you are and whether I really feel a want or need to talk to you. And in the latter case of need, depending on whether I’m really looking forward to it or it’s just an obligation. Thanks, and have a great day, which I realize is something that is just a social convention to say—though in a generic, goodwill-to-all-mankind sort of way, I do of course hope you have one.