It’s become almost a tradition in our family to decide against a big turkey dinner on holidays. Instead, we are apt to set a big pot of soup or chili to cook while we play games, watch football, work on jigsaw puzzles, or nap. Today while my family in Wisconsin was cooking one batch of beef chili and one batch of split pea soup, the professor and I were simmering a pot of spicy lentil chili. I love lentils, and while I was cooking I thought about how the shape of this versatile ingredient has brought its name into our English language in several ways.

The English word for the food comes from the Latin diminutive, lenticula, via French lentille. English also had at one time the now obsolete “lent” or “lente,” a noncount noun word form. You can see from the following that other Romance languages also stuck with the diminutive: Sp. lenteja, Pt. lentilha, It. lenticchia.

As to other words, perhaps the most obvious is “lens” which derives from “lentil”—sort of—because of the similarity in shape. That is, “lens” means “lentil” in Latin. So the lowly lentil, in a way, is in our eyes, in our cameras, and in our microscopes.

From time to time here, we in the Seattle area hear another word in this family. There’s a weather phenomenon sometimes seen over Mt. Rainier, where lenticular (lentil-shaped) clouds precede rain by about 24 hours. These clouds can be awesome sights, sometimes looking like flying saucers. This picture, from Cliff Mass’s weather blog, is a great shot of them. There are also lots of other very cool photos of these cloud formations online. 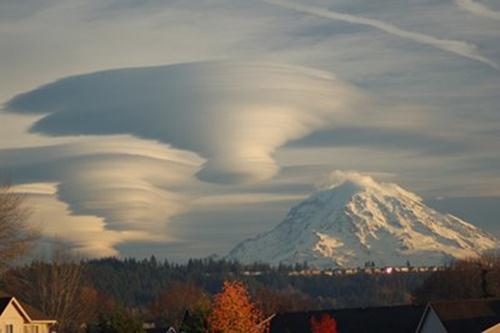