Our Washington State Department of Transportation has great communication skills. Every week, they send lighthearted, humorous email updates that include useful information about construction, sporting events, and other happenings that might cause traffic problems in the near future. The messages also contain bonus info about transportation system history and trivia. One wouldn’t think that info on traffic conditions would be all that compelling, but they make it fun. WSDOT¹ offers emails that cover 200 different topics and regions. I subscribe to three, and I read every single message.

One of this week’s messages had a “random transportation fact” linked to a WSDOT blog post about a fallout shelter that resides somewhere under an I-5 bridge. I presume the writer was deliberately vague about the location lest fallout fans flock to it, but there was a photo of the entrance (below). It’s really worth going to the post if you’d like to see additional photos of the interior, the exit tunnel, and posted instructions showing how to use the power and water systems. 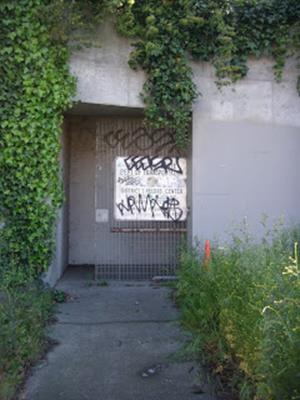 The bomb shelter photos took me back to childhood. Like almost every American born anywhere in the vicinity of the baby boom years, I grew up terrified of nuclear annihilation. I’ll barely touch on here the “what were they thinking” rant—the absurd idea of being safe in a shelter with a finite food supply and nothing but centuries worth of radioactive devastation outside.² On the other hand, these days I know there’s nothing for me to worry about. I live close enough to some great targets to take comfort in the fact that, should the Russkies decide to go for the brass ring—presumably to make up for the one that didn’t open—I’ll be charred crispy before I even know what happened.

So are we headed that way again? In the direction of having to try to figure out how to save our own asses at the advent of WW3rd-and-Last?

Perhaps I’ll have everyone over to my house for a big party. I’ll do it up big, remodeling and fancying up the whole place in preparation. We’ll have a great time. People will play games in the back yard while I watch from the balcony. Shortly after everyone goes home, I’ll commit a heinous home invasion crime nearby. Hey folks, I hope everyone will remember me for that great party I threw, instead of the home invasion! It’s ok, it was my home anyway! I live there now! It’ll give me a place to hang out while I consider moving in with Idaho, B.C., and Oregon (for starters, but probably not in that order).

Thanks, WSDOT, for this great story. Nuclear war is a bummer.

***
¹ Say WISS-dot!
² See this modern-day take on the bomb shelter, brought on by among other things, the Mayan calendar panic.