Note: a This American Life podcast inspired this post.

I’ve been thinking about getting a job. Not that I don’t have a job. I do—two, really—private investigator and Spanish interpreter. I haven’t been as busy as I’ve liked lately, though, so I’ve been looking casually. Maybe there’s something out there that’s a good fit, and that would leave me the flexibility and freedom to still do the investigation and interpreting work.

A week ago, I was cruising craigslist, and saw a position I thought I might like. I figured I’d keep it in mind. That evening, the Professor and I went out to dinner with two brand new friends, women I had met at a party at the home of an investigator friend of mine. Since this was our first real meeting, we were getting to know each other, talking about, among other things, what kind of work we do. Turns out, one of these women does the VERY SAME JOB (there are multiple positions) that I was looking at on craigslist that morning.

Well, pretty good, actually. Many of the events we view as amazing coincidences are less improbable than we think. There were a lot of work-related data points at that table. We were all in the 45-65 age range and had extensive job histories. I had looked at a number of ads. The nature of this particular work is somewhat related to investigations, so someone who was moving in the sphere (at the party) of another investigator would be more likely to be working at something that I’d also be interested in. The job is part time, and both of us are sort of in the category of semi-retired. We’re similar in age, so we’d also be more likely to be attracted to part-time work for that reason. The position requires a higher level of education, and of course we’d be more likely to socialize with someone similar to us in that way.

Almost any amazing coincidence can be dissected like this. Over breakfast today, the Professor and I talked about different coincidences we had experienced and the factors that made them more likely than they first appeared. Here’s another example. In 1999, I attended the Mensa annual gathering in Long Beach, CA. I met a woman there in passing and we chatted for awhile. She lived in Virginia; I lived in New Mexico. Two or three years later, I ran into her at a potluck in Seattle, where by that time we had both moved. What are the odds?!?!? Not so bad, really. When we met in California, we both were visiting the LGBT hospitality suite at the conference. Seattle has a highly intelligent and highly educated population. Seattle has a large LGBT population. While Washington is still more welcoming to gay people than many places, that was even more true 15 years ago. Virginia and New Mexico are both places that might make you want to get away for awhile and go to a conference for brainy fun, and are both places that, if you’re gay, might make you want to move to a place like Seattle. And last but not least, middle-aged lesbians tend to have potlucks. So, a scenario where two smart lesbians living in less-than-gay-friendly places might end up first in the Mensa hospitality suite in Long Beach and later at the same Seattle potluck, is less improbable than you might think. 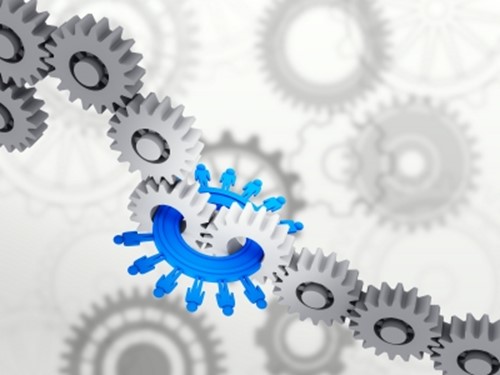 The Professor visualizes this concept as the turning of cogs. Our lives are composed of many, many cogs. Sometimes, at an unexpected moment, a number of the teeth from disparate cogs intersect, and we have our coincidence. I picture these elements more as data points, as I termed it above. All our lives are composed of the charting of millions of data points—places we are and have been, each with a time component of the moment we were at that place. The people around us and all connections that they bring to us as secondary data points. What sort of work we do and have done. What sort of activities we like, what our national origin is, what food we like, what health issues we have, what clothes we wear, whether we need glasses, whether we drink tap water or buy bottled. If you buy bottled, you might end up in a different aisle at the grocery store on that day when your best friend from college, whom you haven’t seen in 20 years and who is in town with his wife to bring their daughter to college, a little liberal arts school 1800 miles from where you knew each other…but he drinks tap, so you miss each other, and never know how close you came to a coincidental reunion. You of course, teach at that little college. You and your friend had similar values/backgrounds/interests that brought both of you to the college you attended back when. Those values were then reinforced by the similar education that you and your friend got. So it’s not so odd that, even across the country, you and his daughter should end up as a professor and his student. Because they have a common last name, you’ll never wonder whether she is your college friend’s daughter.

The point is, when there are this many millions of data points, it would be far less likely if some were NOT to coincide! But none of this—none of this. None of this! Takes away the magic and delight that the universe lends us with these coincidences. They are often sweet and wondermaking.

Here’s my most poignant coincidence story. In the mid-’90s, I lived in Puerto Rico. My position was a long-term but temporary one, and I ended up leaving after two years. I had loved living on the island, and several years passed before my mourning over having to leave was complete. I just wanted to go back there, and in a way, I did. I was living in the middle of the New Mexico desert when I met the Professor, then moved in with her. Her house was on Puerto Rico Avenue.