Do you think you’re beautiful?

O wad some Pow’r the giftie gie us
To see oursels as ithers see us!
–Robert Burns

Who would you think you are if you had no mirror? It’s hard to conceive of this as a possibility in our time. And even ages ago, Narcissus managed to find a pond. But if all mirrored surfaces somehow magically disappeared, what would happen? Perhaps you’d have a better opinion of yourself, not being able to see your own sags and bags, your wattles, wrinkles and warts. On the other hand, if you based your self-concept only on feedback that comes from others, it might present some difficulties in itself. People can be unkind. 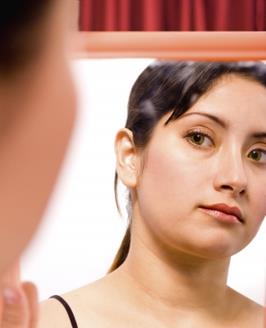 I am thinking of this because I’ve been haunted by a conversation I had a couple of weeks ago with a Vietnamese immigrant nail tech. Vietnamese nail salons are ubiquitous here. There are at least half a dozen in our immediate neighborhood. The shops also come with many problems, chiefly the possibility of labor law violations and health hazards caused by exposure to unvented chemicals.

To try to attempt from contributing to these issues, I use shops that appear to have a positive atmosphere, stores that seem to have less employee turnover, and places that at least prop open the door, even if there is no ventilation system per se. Fortunately, the weather here allows for that almost year round. I also always tip very well and in cash. My current tech Tina, whom I’ve been with for about 2 1/2 years, is a citizen and has been in the States for 20 years. No need to worry about her! She can hold her own for sure. Exhibit A to prove that she is not a shrinking violet: one day she asked me if I ate meat. When I told her that I do, but not very much, she then asked me loudly and with consternation, “Why you so fat?!?” After I quit laughing, I explained that I eat a lot of candy.

While I love Tina’s work more than that of anyone else who’s ever done my nails, she’s out in Issaquah; it’s sometimes difficult to work in a visit to her shop when I have to add the travel time to it. While I usually regret it (as does the Professor, bitterly, since she is the one who has to listen to me gripe about the substandard cuticle trim), I sometimes stop by another salon if things are getting too ragged and no trip to Issaquah is in the offing.

It was at one of these places that I crossed the path of a tech named Linda. (Many of these women use an American name that’s easier for clients to pronounce.) Getting a manicure can be an odd thing. You may have never before seen the woman—I’ve only ever seen two male techs—who does your hands and may not ever see her again. A language barrier may allow for little conversation. Nevertheless, this someone you don’t know is inches from you, touching and massaging your hands. Thus, a manicure may be simultaneously impersonal and intimate.

Many clients choose not to speak, but I usually do. In this instance, Linda was the only person there—she turned out to be the owner. I know that she must have heard this hundreds of times in her adult life (emphasis on adult, as we shall see), but I couldn’t help myself. As she approached, I remarked on her stunningly beautiful eyes, which were a startling green with flecks of brown and hazel.¹ She seemed to be 40-45, so my first thought was that she was the child of an American G.I. The children we left behind have had a terrible time, suffering cruelty, shame and discrimination for no crime other than being biracial—and children of the enemy.

The tech’s English was quite good, though strongly accented, and we chatted throughout the time I was there. Since we had talked about her eyes, I asked her if her dad was American. She said yes, and added, “I don’t know my dad. I don’t know my mom, too.” She explained that she was abandoned at an orphanage, where her adoptive mother found her. She told me her dad was white, but that she has a sister who lives in West Seattle who is half black. Their mom rescued the sister from a trash can and adopted her as well. All of this information that hit me as so horrifying seemed mundane to my narrator. However much it might still hurt, she relates the tale in a matter-of-fact way. It’s just her story.²

We’ve been at it a little while now, and the conversation is feeling comfortable, so I ask her how the other kids treated her when she was growing up. Not surprisingly, they were mean; she said they taunted her with something like, “merry-ca, merry-ca.” She said that she didn’t even know the word “America,” so she didn’t know what they meant. (The kids chanting it might not have really understood the nature and history of the jab either, for that matter.) She said that she was made fun of for her eyes, that people told her she looked like a cat and that she looked scary. She didn’t really understand those remarks, either.

What came next is what has haunted me. She told me she grew up in a tiny, poor rural village. There were no mirrors in it. As far as she could tell, she looked like everybody else. But when she was 18 or 19, she went to Saigon for the first time. There, she saw a mirror, and saw her eyes. Her incredible green, brown-flecked eyes. What must that moment have been like for her? I was too stunned to ask.

The rest of the story was a happy one. She and her husband own the nail salon now. She recently became a citizen, after passing the test on her fourth try. She said it was really hard because her English isn’t very strong. Her daughter helped her study until she finally passed. I felt happy for her success, but sad that she had to take the citizenship test. She should have been a citizen automatically, because her dad was also merry-ca.

So who would you be if you had no mirror? What realm would you inhabit that perhaps is alien to you now? I’m going to spend some time considering what my self-concept is based on. I want to be a citizen of my own country.

¹ I always find it unsettling when I describe a woman of color as beautiful. I want to display sensitivity to the pain that women of color have felt for being exoticized, eroticized, and objectified for their appearance.
² “The greatest cause of discrimination towards Amerasians came from Vietnamese societal attitudes. Mixed-race children were often so horribly tormented by their peers that many did not attend school. The more Caucasian or African American they looked, the more severely they were harassed. Faced with these pressures, many mothers abandoned their Amerasian children. Some were accepted into orphanages, while some became street kids, pursuing criminal activities to survive.” From “American GIs, Vietnamese Women and Children,” on PBS website about the American Experience episode “Daughter from Danang.”
**

Additional reading:
From globalpost.com, Vietnam War babies: grown up and low on luck
From Asian-nation.org, Vietnamese Amerasians in America