On Friday, the President signed a Gay Pride Month declaration—not his first. Who could have guessed that could happen, even a decade ago?¹ A biracial president showing some love for the LGBT folks. Virginia Slims, eat your heart out. 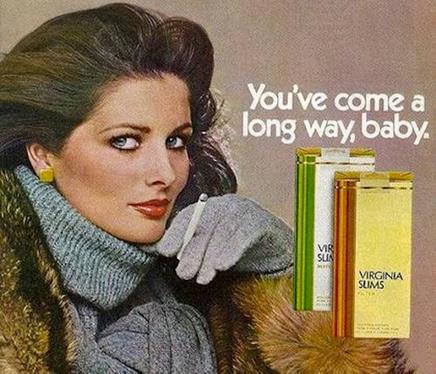 June was chosen as Pride Month because that’s the month in which the Stonewall riots took place, in 1969. You can read more about it in the linked article, but I like to think of it as the moment in history when the cops realized that just because a drag queen is wearing a dress and heels, it doesn’t mean that she’s free of the upper body strength she has when she’s wearing jeans and work boots. Other homophile groups came before, but Stonewall became a seminal event (no snickers, you people) after which the gay community began to organize and fight back. In my vows at our government wedding in 2012 (our real wedding having occurred in 2004), I told the Professor I was proud to count among my forebears the Daughters of Bilitis and the Stonewall trannies. The Daughters had it going on in 1955.

To celebrate Gay Pride this year, I did something yesterday that I’ve been thinking about for a couple years, which is to get a rainbow tattoo. It’s not my first tattoo. That one pretty much gets a regular viewing from only my wife and my massage therapist. This one, I put on my upper left arm, sailor style. The Google image search for rainbow tattoos will give you an idea of the wide array of rainbow imagery that’s out there. Rainbow hearts, rainbow Hello Kitty, rainbow zig zag lightning, and some creepy things like the one that looks like a bear claw mauled the skin, exposing a rainbow underneath. If that’s what it took to come out, I’d’ve stayed in, thank you very much. However, I’m declaring the creepiest, this rainbow crying eye image: 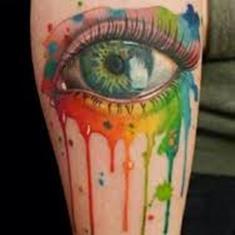 A couple of years ago, I saw one on the image search—I see it still comes up on the first page—that caught my eye, though to make it work for me I changed up the color scheme. It marinated those two or three years somewhere in the back of my brain (which is about the amount of time I feel I should think about getting a permanent mark), and yesterday I decided it was time to go do it. Robin at Renton’s oldest tattoo shop, Ancient’s Arts, turned my awkwardly drawn rendition into a good looking pattern and did the work for me. 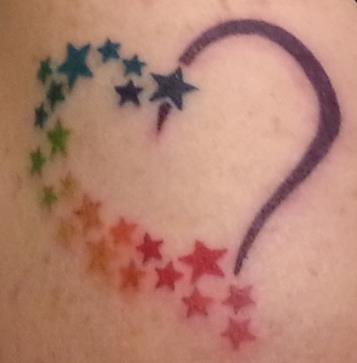 If my love for the Professor were an image, it would be a big purple swoosh with a cascade of rainbow stars erupting from it. Happy Pride Month, everybody.

¹In fairness, also see this article.